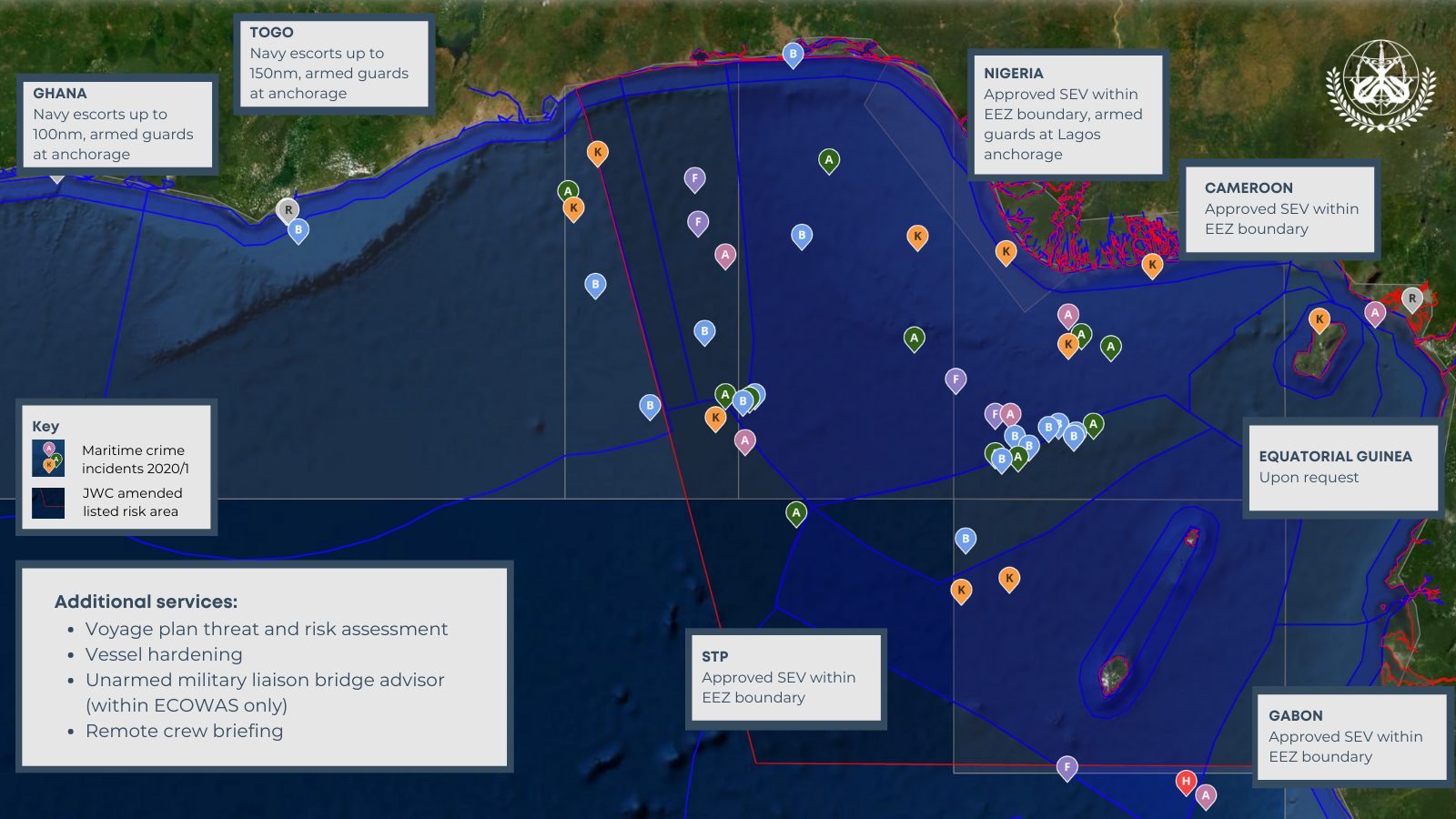 Protection Vessels International (a DG Risk Group company) is supporting navies and commercial vessels in the region across various jurisdictions with a fully compliant fleet of Security Escort Vessels based out of Tema in Ghana. Here’s the Maritim Africa article which was published in June 2021 in full:

Piracy continues to thrive in the Gulf of Guinea with 2020 seeing 136 seafarers abducted in 27 incidents and the use of guns reported in over 80% of the incidents. Kidnappings are happening further offshore with larger groups of seafarers being abducted. Like the rest of the world, countries bordering the Gulf of Guinea have been overwhelmed by the chaos of 2020, tackling both economic and societal instability brought on by the pandemic which has complicated the financial investments needed to tackle piracy.

The supply chain never sleeps, forcing ship operators to become ever more diligent to keep their ships moving efficiently in the face of such an increasingly challenging environment. Over the years, operators in the Gulf of Guinea have faced many structural problems head on, including cargo operations. With pi- racy becoming more of a focus, operators must now understand the complex compliance environment for maritime security services in the Gulf of Guinea. Steve Cameron, a provider of global maritime expertise, and commercial shipping consultancy in West Africa, began operating a liner service from Europe to the Gulf of Guinea almost 40 years ago, and continues advising the sector through Cameron Maritime Resources. Commenting on piracy, he states that “criminality at sea has always been there, but today we face a more sophisticated and aggressive form of piracy”.

“Operating a ship in the Gulf of Guinea is challenging enough. Having to understand the compliance environment for maritime security is time consuming and not completing your homework has huge implications for the owner and the crew.”
As a result of the increasing threats, Mr Cameron states that “the best way forward is to align yourself with a company that not only understands and robustly complies with the regulations, but also has a strong on-ground presence, local knowledge, and a track record of safety”. Stories shared among crew across West Africa invariably detail the rumours of vessel and crew arrests by authorities who discover the use of non-compliant security solutions. “You hear these stories of a vessel or crew being detained and the frustration that goes with it, and that is simply a result of receiving bad advice” adds Mr Cameron.

A quick internet search of maritime security providers in the Gulf of Guinea shows results for hundreds of companies and liaison agents across numerous West African jurisdictions. Advice on what is legal varies greatly, as do pricing and contractual obligations. Similar to the situation faced in the Indian Ocean with the rise of Somali pirates 10 years ago when there were little to no regulations, the industry is filled with companies making their own rules.
Over time, in the Indian Ocean, standards and regulations came into force to ensure that all providers were held to the same standards. One company that was a leader in establishing the compliance frameworks and initiatives in the Indian Ocean was UK-based Protection Vessels International. With a track record of over 10,000 safe transits in the Indian Ocean, they are now focusing on combatting piracy in the Gulf of Guinea. According to PVI Managing Director, James Hilton, the company, now operating as part of DG Risk Group invested heavily into building a compliant operation to span multiple jurisdictions.

“Even without the presence of piracy, the Gulf of Guinea and West Africa are very complex operating environments. As a result, we’ve worked hard to provide our clients with fully compliant solutions to ensure the safety of their vessels, crew and cargo. We now have PVI teams fully operational across 7 jurisdictions ” adds Mr Hilton. The expansion of the PVI’s maritime security solutions into West Africa assisted the company in securing the most complex maritime project ever undertaken in the Gulf of Guinea. “It was an incredibly complicated project, which involved meticulous planning and extensive liaison across 7 different governments to ensure that our operations remained compliant throughout the task. Following the completion of this project, we have further expanded our experience and understanding of best practices for private maritime security companies to work in partnership with national governments to secure safe passage through fully compliant solutions.”

“Building local capacity and contributing to local content development has to be at the forefront of any long-term security solution in the Gulf of Guinea. Foreign navies are already under strain and in the Gulf of Guinea the use of foreign forces only provides a short-term solution.” John Justice, CEO – DG Risk Group.

The below image indicates, by country, which security services can be procured by a private maritime security provider in the region. In all countries the local navy is involved in some capacity, and the service provider must have agreements in place with the navy in order to provide pre-agreed services. In no such circumstances are private armed guards allowed on merchant vessels in the Gulf of Guinea. In countries such as Nigeria, Cameroon and Gabon, privately-owned Security Escort Vessels are used to carry teams of armed navy personnel. 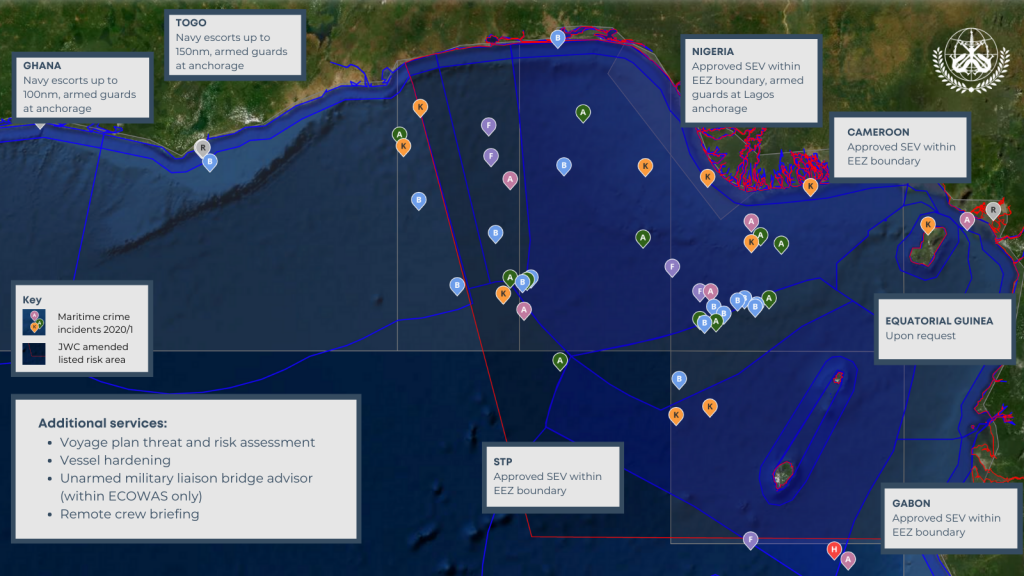 The common theme across the region is that navies based in the Gulf of Guinea do not currently have the capacity to handle the ever-increasing threat from piracy. “ National navies need space and resources (human and fiscal) to build their own capacity; this is incredibly difficult amidst the current post-covid economic climate when nations are facing significant strains on their national budgets ” states John Justice, CEO of DG Risk Group a global provider of risk and security solutions with a focus on maritime security solutions.

“We’ve been active in West Africa for 6 years. In this time, the one constant theme is that each country is proud of its military, and rightly so. We need to support them so that they can expand their naval capacity” adds Justice. “In Nigeria, they’ve got the right concept. The private companies are creating the space for the government to implement the Deep Blue project, whilst offering the assets needed to deploy navy personnel offshore to protect the shipping lanes”.

It is critical for ship operators to understand the compliance surrounding how private maritime security companies interact with local navies, as the frameworks for each jurisdiction are a part of the longer-term strategy. “The main priority as we look to the future is to keep vessels and crew safe, and to do it in a legal, compliant way” comments Mr Justice.

As the global economy continues to creak under the tremendous strain imposed by lockdowns and handling a major health crisis, it cannot be expected that international naval support is going to be implemented on a large scale. Politicians are allocating their own budgets prudently, and in trying times the allocation of billions of dollars to protect the territorial waters of numerous sovereign, functioning countries may be too much to ask.

In the meantime, private maritime security companies must lead the way in protecting the waters of the Gulf of the Guinea and ensuring safe passage to the vessels and crew who work in the region. However, it falls upon the ship operators to ensure that whatever solution they choose, is compliant for each jurisdiction they sail.