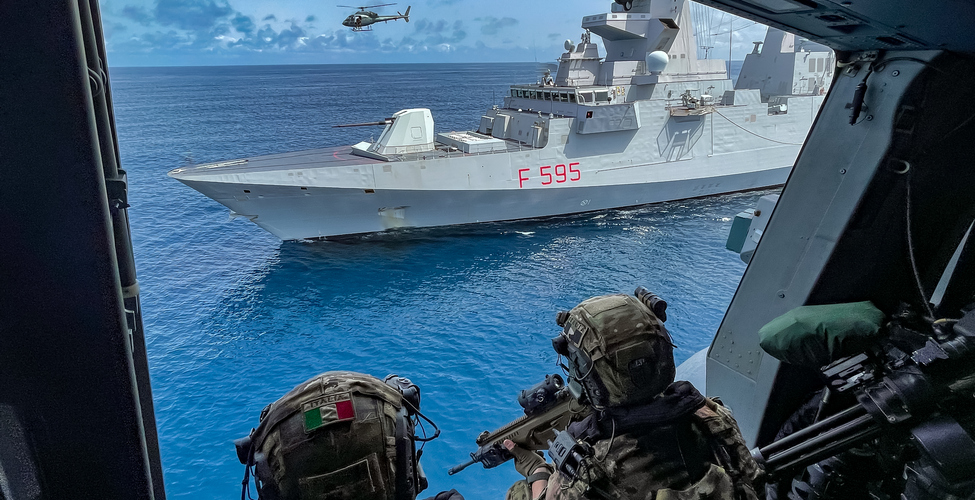 The Italian Navy is the latest European force to join Ghana’s anti-piracy campaign in the Gulf of Guinea.

Crew from the Carlo Bergamini-class frigate Luigi Rizzo berthed Tema Port earlier this week. The Italian Navy is set to provide training to 187 Ghanaian soldiers in a bid to strengthen the provision of maritime security in waters off West Africa.

The collaboration between the European naval force and the Ghanaian Navy will send a strong signal to pirates operating off country’s coast.

With 1,500 vessels travelling through the Gulf of Guinea every day and over 200 piracy incidents reported last year these training programmes are essential for building regional navies capability and capacity to maintain safety in their territorial waters. The Gulf of Guinea covers 11,000 square kilometres (4,247sq miles) and stretches from Angola to Senegal. It is one of the world’s most important shipping routes for both oil exports from the Niger Delta and consumer goods to and from Central and West Africa, but it is not well guarded, a combination that creates ideal conditions for piracy. In 2020, IMB’s Piracy Reporting Centre (PRC) received 195 incidents of piracy and armed robbery against ships worldwide, in comparison to 162 in 2019. The incidents included three hijacked vessels, 11 vessels fired upon, 20 attempted attacks, and 161 vessels boarded. The rise is attributed to an increase of piracy and armed robbery reported within the Gulf of Guinea as well as increased armed robbery activity in the Singapore Straits.

Incidents in the Gulf of Guinea are particularly dangerous as over 80% of attackers were armed with guns, according to the latest IMB figures. All three vessel hijackings and nine of the 11 vessels fired upon in 2020 related to this region. Crew kidnappings were reported in 25% of vessel attacks in the Gulf of Guinea – more than any other region in the world.

Once kidnapped, crew are removed from their vessel and can be held on shore until their release is negotiated. The furthest crew kidnapping in 2020 occurred almost 200 nautical miles (NM) from land with the average kidnapping incident taking place over 60NM from land, according to IMB.

Following the completion of training, the Italian Navy’s Luigi Rizzo will resume anti-piracy operations in the Gulf of Guinea until early June when other naval vessels will replace her.