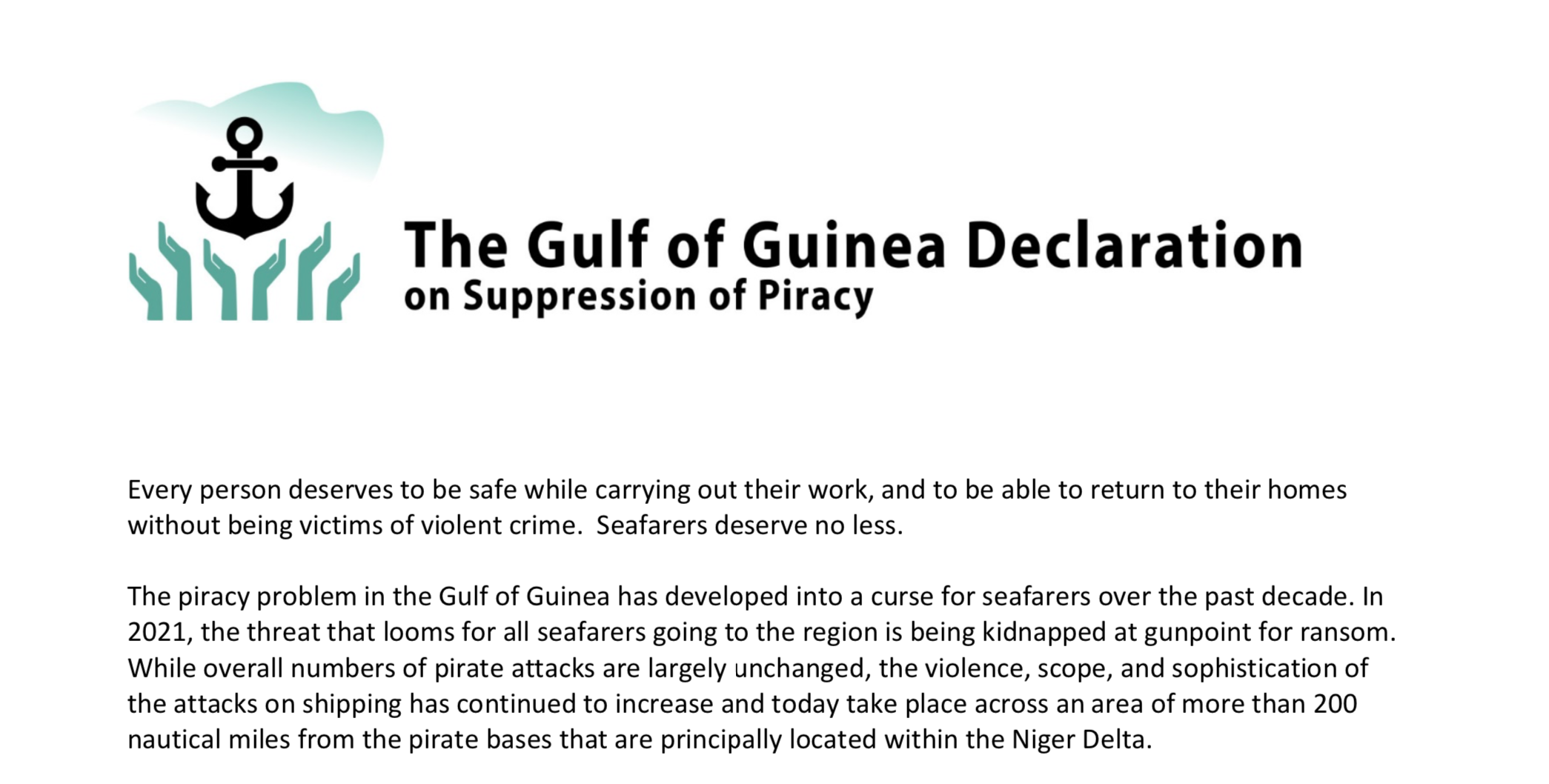 PVI has joined forces with the world’s leading companies and associations in the shipping industry to sign the Gulf of Guinea Declaration on the Suppression of Piracy.

More than one hundred organisations from across the maritime industry, including flag state administrations, shipowners, charterers, and shipping associations have come together as a taskforce to raise world attention about the threats to shipping in the Gulf of Guinea.

“We are committed to providing safe passage for vessels and crews while operating within the Gulf of Guinea and beyond. Signing this declaration is far more than just adding names to a page, it is reaffirmation of Protection Vessels International’s long term commitment to partnering and capacity building with regional navies and home-grown West African security companies by sea and by land in the Gulf of Guinea”, said James Hilton, Managing Director.

BIMCO the shipping association behind the initiative, convened a group of shipowners to draft the document. Their aim was to speak openly about the piracy problem in the Gulf of Guinea and get all the stakeholders involved to develop effective solutions.

BIMCO maintains that the piracy can be suppressed with as little as two frigates with helicopters and one maritime patrol aircraft to actively patrol the area.

As part of this effort, they are calling for non-regional countries to provide the necessary assets on a rotation basis, and that one or more states in the area support the effort with logistics and prosecution of arrested pirates.

PVI is a DG Risk Group company, this week CEO John Justice also signed BIMCO’s Declaration, “We’ve adapted to the threats that exist in the Gulf of Guinea and will continue to support the fight against Nigerian piracy through our provision of fully compliant maritime security solutions which include a 24/7/365 regional operations centre and a fleet of modern, fit-for-purpose security escort vessels which are among the fastest and most capable boats available in the region.”

“But it’s not just about kit and equipment, it’s about empowering communities to provide a lasting security situation to the region’s piracy problems. Our teams will continue to train and partner with regional navies in working towards this goal”, he added.

“We hope that all parties with an interest in a safe Gulf of Guinea will sign this Declaration,” says Sadan Kaptanoglu, BIMCO president and shipowner. In announcing the initiative BIMCO highlighted that 95 percent of the crew that was kidnapped in 2020, a total of 135 people, were taken from ships in the Gulf of Guinea. They noted that the assaults are coming from the Niger Delta and that they are happening in an area less than 20 percent the size of the area where Somali pirates had been active, yet while the international community address the Somali problem it has so far failed to stop these latest assaults on seafarers.

The new declaration says the situation is unacceptable both for the human toll and the economic cost to business in the region and the negative effect on regional economic growth. They believe the attacks are preventable but that the current model of depending on locally sources commercial protection services will not resolve the problem. They note that the scope and sophistication of the attacks on shipping have continued to grow, increasing in violence, and spreading to an area more than 200 nautical miles from the coast.

“BIMCO welcomes the positive steps taken by regional states, especially Nigeria. However, in reality, it will take some years before these states can effectively manage the problem. In the interim period, the best solution is to have capable military assets from able and willing non-regional states to actively combat piracy in the area in support of the efforts by countries in the region,” they wrote in announcing the program.

The Declaration does not aspire to provide the long-term solution to the piracy problem but to help make seafarers safe today. The document expressed the belief that piracy and attempts at kidnapping are preventable through active anti-piracy operations and that by the end of 2023 the number of attacks by pirates can be reduced by at least 80 percent.

“The root causes of the piracy problem in the Gulf of Guinea can only be solved by Nigeria. An estimated 30 million people live in the Niger Delta, many under difficult conditions, and it would be naïve to think that anyone other than Nigeria can address the roots of the piracy problem,” said Carlo Cameli, Chair of BIMCO’s Maritime Safety & Security Committee. “However, suppressing piracy will help our seafarers, just like it did off Somalia a few years ago. It will also establish security at sea and enable regional blue economies to prosper. Without security, there can be no development.”

In launching the declaration, BIMCO notes that the Maritime Safety Committee of the International Maritime Organization (IMO) discussed Gulf of Guinea piracy in its sessions that concluded last week. They welcomed the IMO efforts but believe much more remains to be done, particularly in the short term. The launch of the Gulf of Guinea Declaration on Suppression of Piracy they said is a timely expression of the maritime industry’s call for further action.

Get the full declaration