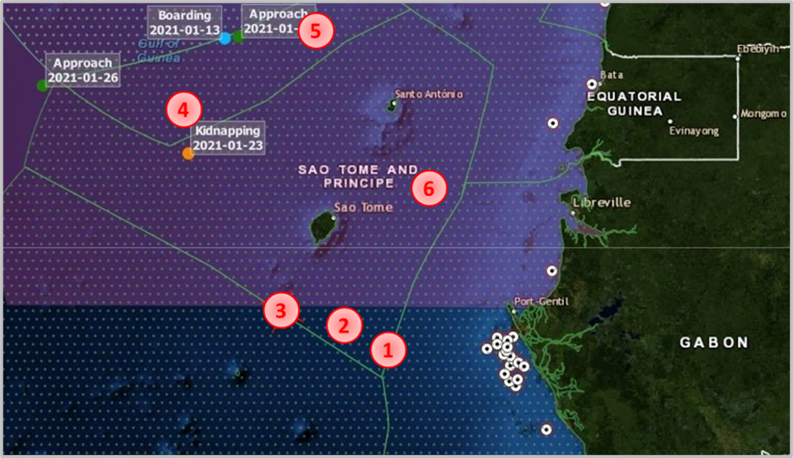 An insight into the operations of West African pirates.

A surge in the frequency of attacks and the evolution of maritime criminals’ operational tactics mean that piracy in the Gulf of Guinea is currently dominating global news.
Pirates are better funded and they are growing their ‘business model’ to the point that when the opportunity to acquire a new mother ship came along, they grasped it with both hands.
On the evening of 7th February 2021, they seized a vessel that would become their new mother ship giving them greater reach and capability to stay offshore for longer.

The Gabon flagged fishing vessel, Lianpengu 809, was hijacked 83nm WSW of Port Gentil (Gabon), with a crew contingent of 1 Gabonese, 3 Indonesian and 11 Chinese sailors. The hijacking of such a vessel symbolised a significant ‘jackpot’ to the perpetrators. The new equipment meant that their operations could be taken to the next level.

The next day, on 8th February, attackers (thought to be using Lianpengu 809 as a mother ship) attempted to board MT Seaking using ladders. This occurred 74nm SW Port Gentil and the master is understood to have taken evasive action to avoid a boarding. Later that day, during the evening of 8th February, shots were fired at LNG Madrid Spirit 56nm SW Sao Tome, once again thought to be from pirates using Lianpengu as a mother ship.

Yet to achieve their desired outcome, the pirates sailed further north into a shipping lane and boarded MT Maria E, 108nm NW Sao Tome on the 9th of February.

Cooperation between the merchant shipping community meant that regional authorities were on high alert for potential sightings. As a result of this collaborative approach the Gabonese Navy was able to track down Lianpengu and apprehend her, escorting her to Libreville.

The threat level in the region continues to be severe and the tale of the Lianpengu is one that the maritime community should take as a warning; no vessel is impenetrable to a pirate action group let alone one emboldened by recent successes and able to operate with impunity.

“Given the identification of relative soft spots in the Gulf of Guinea by the pirates, and their expansion into shipping lanes further offshore, there is an urgent need for credible solutions through cooperation between regional governments, international forces and the private sector, added Hilton who has a track record of 10,000 safe transits under his belt.

Currently, there are many private maritime security options available in certain jurisdictions in the Gulf of Guinea and these operations give regional navies the space to build their own capacity for the long term. However, in the short and medium term, stronger collaboration between the merchant maritime sector, private security providers and government forces is needed to project a strong response to the piracy crisis.

An insight into the operations of West African pirates.

“We advise all ship owners to ensure that their maritime security provider in the region is fully compliant with the local laws and regulations. It’s also important to conduct due diligence on these companies to make sure that they are working in support of regional navies to build future capability”, added Hilton.

It is a great testament to the cooperation between the Gabon Navy and the merchant shipping community that Lianpengu was apprehended, but this cautionary tale serves as a warning to the capability of these pirate action groups as they adapt and evolve their modus operandi to capitalise on perceived soft target opportunities in the Gulf of Guinea.

Find out more about our West Africa services, including details about our fleet of escort vessels: https://www.pviltd.com/services/security-escort-vessels/