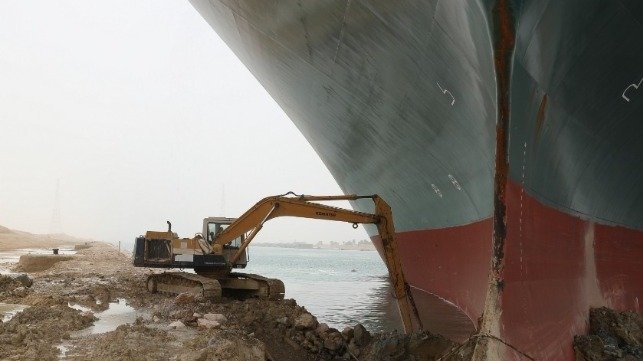 The grounding of the Ever Given in the Suez Canal brought shipping to the sudden attention of the general public – as large vessel casualties often do. The shutdown captivated newsrooms and Twitter feeds for six long days in March and delayed tens of billions of dollars in trade.

Long after the limelight faded and the backlog cleared, the vessel and her cargo remained in detention. The Suez Canal Authority (SCA) filed damage and salvage claims totaling an astonishing $900 million – well in excess of the true fiscal impact. The authority eventually settled for far less, but the dollar figure of the claim is worth noting: That asking price could have looked like a bargain if circumstances had been different.

In several ways, Ever Given was lucky. She went aground in soft sand, in a readily-accessible location, and right by a large concentration of tugs and dredging equipment. Within days, the SCA deployed its own giant cutter suction dredger, a pair of track hoes, a dozen tugs and 600 people to the site. With help from the dredging and salvage experts at Boskalis, the response team had everything it needed to pull the ground out from under the ship, then pull the ship off the ground.

This asset-heavy response might not have been an option if Ever Given had gone aground somewhere less hospitable. Moving specialty equipment to a remote site takes time, and in a grounding every change of the tide can change the circumstances.

“All of the salvage assets in the world were available right there,” says Lindsay Malen-Habib, Manager of Client Services at Resolve Marine Group and President of the American Salvage Association, “and it was still very complicated to refloat Ever Given. If you put one of these very large container vessels in the middle of a remote location, you would have a delay in deploying assets and personnel. And that’s going to threaten the environment and escalate the cost. For example, the Rena cost more than $400 million to remove from Astrolabe Reef, and that was a small ship.”

To ensure the availability of equipment and skilled talent, some salvors have talked about setting up a shipowner-funded salvage retainer system, similar to the U.S. OPA 90 requirement for a designated spill-response contractor. As it stands now, there’s no way for a salvage company to make financial projections in a boom-and-bust business.

A steady stream of retainer revenue would help this rapidly-consolidating sector sustain the right equipment in the right locations. “We’ve not seen that move forward,” Malen-Habib says, “but I think it would be a great idea because it’s a ‘whole-of-industry approach.’”

Timely access to the right assets can make all the difference. In March 2021, just a few weeks before Ever Given went aground, the bulkers Afina I and Kiveli collided off the coast of Kythira Island, Greece, near the southern tip of the Peloponnese. Kiveli struck the Afina I amidships, causing hull damage and water ingress, and the two vessels remained connected in a “T-bone” configuration after the collision.

Luckily, the site was just 100 nautical miles from the home office of Tsavliris Salvage, which maintains a full response team and an equipment warehouse in Piraeus. Tsavliris was contracted for the response and deployed a fleet of tugs to the scene along with equipment, divers and experienced salvors.

Tsavliris’ tugs and crews held the two vessels safely together, then towed them both as a single unit to a sheltered bay. At this protected anchorage, the ships were carefully pulled apart and prepared for relocation to Piraeus. Thanks to a rapid, asset-intensive intervention, both vessels are still trading today.

The prime example of the modern supersized casualty, the Golden Ray wreck removal, is expected to cost at least $850 million (and estimates are climbing). It’s already one of the most expensive and lengthy salvage jobs in industry history. By the time it’s finished, it may rank second in price after the Costa Concordia.

The 650-foot ro/ro Golden Ray lost stability and capsized in St. Simons Sound, Georgia in 2019. When she settled down in the soft silt on her port side, there was little chance of refloating her. The shipowner contracted with T&T Salvage to carry out the wreck removal using a controversial solution: T&T would bring in the heavy lift barge VB 10,000 to cut the ship into eight sections using an anchor chain – like slicing a roll cake with a length of wire.

There were complicating factors – residual fuel oil, strong tidal currents and thousands of wrecked, gasoline-carrying vehicles inside – but the team estimated the work would advance at the rate of one cut every 24 hours, then one week per section for removal. A sturdy environmental protection barrier would catch pollutants, and the project would be done in a season.

However, Golden Ray put up more resistance than expected. Early in the process, the chain-cutting operation began breaking connecting links, forcing halts for repairs. The cuts stretched into weeks, then months. Switching to extra-long, high-grade chains helped, but the 24-hour-per-cut estimate was wishful thinking. The final cut was completed on September 4, about 300 days after the first one began.

Although there were technical challenges as well as a few fires and spills, several important things did go right with Golden Ray, according to the response command.

First, there were no significant injuries. The specialized rig kept the salvage crew away from danger during most of the cutting operation, controlling risk. “The whole concept behind using the VB 10,000 is that it has an automated winching system,” spokesperson Lieutenant Michael Himes said, “which allows for cutting operations to proceed without people on deck,”

Second, the heavy-lift barge was exactly the right size for the job. “It was a very fortunate piece of equipment – just large enough to fit over the ship but small enough to fit inside the environmental protection barrier, which is right up against the shipping channel,” Himes added.

If the wreck had been any bigger or the crane barge any smaller, VB 10,000 wouldn’t have been an option. And if circumstances had been different, Golden Ray could have been far larger. By way of comparison, Ever Given is twice as long, twice as wide and three times as heavy as the lost car carrier – and that’s sitting empty at the pier. Add in Ever Given’s 18,000 TEU of containerized cargo, and the difference is massive.

“As the structure and size of ships expands,” explained Matthew Cooke, Naval Architect & Project Manager at T&T, “the technical solutions become more complex. Salvage requires the engineering team to be flexible and adapt to unforeseen challenges. What’s shown on paper or the computer screen must come to life and work in intricate operations.”

The Golden Ray’s epic tale seems brief compared to the saga of the Kea Trader, the container feeder that went aground on Durand Reef in New Caledonia in 2017. The last fragments of her hull were just pulled out of the water this September, more than four years after she landed on hard coral. The remote, shallow, wave-washed site was extremely challenging to access, so salvor Shanghai Salvage simply built the right asset – a special shallow-draft crane barge.

As a division of China’s Ministry of Transport, Shanghai Salvage (also known as China Offshore Engineering Solutions, COES, or China Rescue and Salvage) could afford to do that – to build its own bespoke vessel – because it can draw on state resources for its projects. According to its competitors, it also uses those resources to bid below market value.

“How do private salvage contractors compete financially with a state-funded international salvor?” asks Captain V. Seva, Managing Director of independent salvage firm Vmax Marine. “China Rescue and Salvage can come in with a lowball price because they know they will never go bankrupt. They’re not so interested in the emergency response but are favored to pick up wreck removals as the low-cost bidder. Then, using the contract clause for ‘change in circumstances,’ they tend to renegotiate the commercial aspects during the project itself.” (COES’ U.K. representatives did not respond to a request for comment.)

Other Chinese salvors have also been moving out beyond their home waters. Guangzhou Salvage (another division of the Ministry of Transport) handled the wreck of the Thorco Cloud off Singapore in 2015, and Lianyungang Dali Underwater Engineering Co. conducted the removal of the stern of the Wakashio from a reef in Mauritius early this year, completing a project started by Smit.

Protection Vessels International offers a different (and uniquely hazardous) form of salvage response. In the Gulf of Guinea, maritime kidnapping has become all too common. Nigerian pirates, emboldened by lax maritime security measures, range far from their usual territory to attack vessels as far away as Togo or Ghana.

When one of these attacks occurs, PVI often gets the call to respond. The company operates private armored patrol boats which can pick up military servicemembers from any of the coastal states in the region. Once armed personnel from the right coastal state are safely on board, PVI’s boats can get under way to the scene of the pirate attack, ripping along at up to 45 knots. On arrival, the soldiers on board respond to the pirates, if needed. If the pirates have fled already (and usually they have), the operation shifts gears to vessel recovery.

“You go on board a vessel and what you’re likely to find is some crewmembers are missing,” says PVI West Africa specialist Craig de Savoye. “Those are people, and they’ve got families at home. Ransoms get paid and crewmembers get released, but those people will be traumatized. And then that also affects the rest of the crew. They’ve just seen their buddies taken off a vessel by force.”

As with any salvage response, a big part of the mission is securing the right assets on a tight schedule. Getting hold of a technician or a tug from a nearby oilfield takes connections and experience. “That’s the complexity of West Africa,” de Savoye says. “There’s no Yellow Pages directory. It’s about figuring out what angles to work to get the assets you need to help with that operation, and fast. It’s really an all-hands-on-deck situation because the last thing you want to see is loss of life or a vessel in distress.”